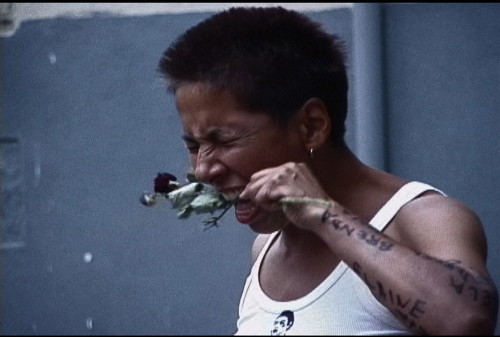 At the 2002 Talking Stick Festival in Vancouver Paul Wong recorded Rebecca Belmore’s performance VIGIL. The unedited document and excerpts have been used by Belmore in various ways. 8 years later Wong edits his short version of this seminal performance and recording.

“Performing on a street corner in the Downtown East Side, Belmore commemorates the lives of missing and murdered aboriginal women who have disappeared from the streets of Vancouver. She scrubs the street on hands and knees, lights votive candles, and nails the long red dress she is wearing to a telephone pole. As she struggles to free herself, the dress is torn from her body and hangs in tatters from the nails, reminiscent of the tattered lives of women forced onto the streets for their survival in an alien urban environment. Once freed, Belmore, vulnerable and exposed in her underwear, silently reads the names of the missing women that she has written on her arms and then yells them out one by one. After each name is called, she draws a flower between her teeth, stripping it of blossom and leaf, just as the lives of these forgotten and dispossessed women were shredded in the teeth of indifference. Belmore lets each woman know that she is not forgotten: her spirit is evoked and she is given life by the power of naming.” - Description from rebeccabelmore.com

In the closing moments, Belmore is leaning against a pickup truck, playing on the sound system is ‘Its A Man’s World’ by James Brown. On Dec. 9, 2007 serial killer Robert Pickton (58), was found guilty on six counts of 2nd degree murder in the deaths of Sereena Abotsway, Mona Wilson, Andrea Koesbury, Georgina Papin, Brenda Wolfe and Marina Frey. He is suspected in the disappearance of dozens of women.

VIGIL 5.4 was presented at 5.4 One More Than Three at Mountainview Cemetery as part of Paul Wong ‘5’, a series of site-specific events and installations commissioned by the City Of Vancouver 2010 Olympic and Paralympic Public Art Programs. www.5.paulwongprojects.com