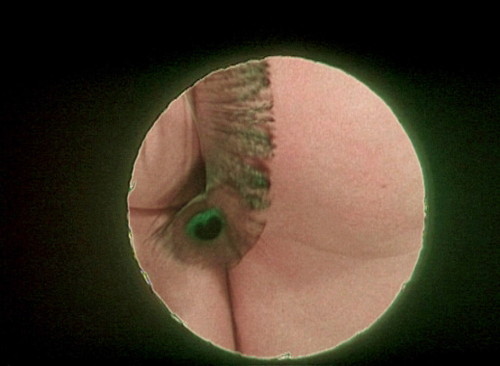 Translating a musical stage performance by the group "Larry Peacock" into the language of film, Syncpoint combines film images created directly on film leader with those created through normal exposure of 24 frames per second with a 16mm film camera.

Central to this experimental music video is the image of the synchronization-point as a hole, derived from the film-technical synchronization method of punching a hole into the first exposed and keycode-numbered frame of a roll of film prior to its transfer to video.The image of the hole does not only mark a point in time, but is in connection with the photographically captured (percussion-) actions of the performers perceived either as a round mask of censorship or as a filled, dot-shaped image. Purposefully designed and random synchronicities between the visual and accustic events allow for a variety of interpretive connections.

Larry Peacock is a feminist project with and about the performativity of electronic / pop music, reflecting gender politics and the role of the audience. The project not only destabilizes the normativity of binary gender categories, but also art categories such as "high" and "low", "dance", "concert-performance", and "choreographic work".