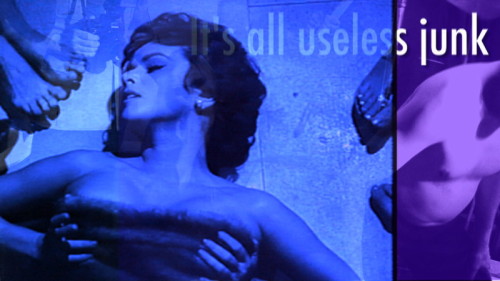 The Party Is Over!

Istvan Kantor’s obsession with revolution, sex and technology manifests itself again in his new video “The Party Is Over!” But this time Kantor’s cinematic manifesto announces the demise of technological society: the end of an era that starved itself to death without revolution.

Kantor’s dramatic final statement is feeding from his broken beliefs that dominates this honest but highly depressing work. The only escape the viewer can find is Kantor’s charismatic humor that surrounds even the darkest moments of this horrifying masterpiece. Kantor recently won the prestigious European Media Art Festival Award in Germany. His work remains confrontational and controversial.

The Party Is Over! is an experimental fiction about the inevitability of the end that is both certain and elusive. The necessity of disappearance, the end of an era, is the decadent philosophical base for Party Is Over!. Just as passionate as cruel, dramatic and ironic, the performance is executed by a group of artists, involving about 6 – 8 performers with highly developed improvisational skills.

The setting for Party Is Over! is an old fashion artist loft, separated from the rest of the world, serving as both living space and rehearsal studio for a performance group. Outside all seems dead and nothing happens. Inside the characters are rehearsing a new play that takes up all their time and energy. During the play they realize that they are dying of starvation and fear takes over their mind and body. In spite of all they keep going with the play which ends, in both script and in reality, with their death.

The following are the 6 main sets of the piece.

1/ INTRO SCENE
In a grey room the last survivor of the group, the narrator, is recording his last will on video.

2/ DINNER SCENE
Around a large table the performers are drinking eating and cheering the director who’s script was approved for production and the rehearsal can begin. The party ambience is high but gets suddenly interrupted by one of the performers vomiting on the table.

3/ SHOWER SCENE
The shower is transformed into a tiny theater where a couple of the performers
execute a sexually explicit performance in front of a small audience composed by the rest
of the performers. The vomiting reoccurs.

4/ LIVING ROOM SCENE
Hysteria and panic rules. They realize that they are all mortally sick and not being able to eat anymore.

5/ TOILET SCENE
Being sick, the toilet becomes the central part of their life. They all gather around it for a last collective statement.

6/ END SCENE
The narrator again. His dead eyes are staring into the video camera.