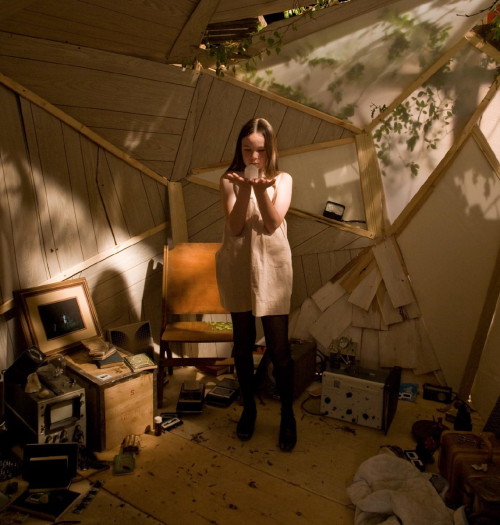 Bridge Kids is availble for single channel screenings (13:11 with credits) or as an installation (12:13) with additional video components, drawing and photography.

In the near future there are no adults, a tree house becomes a door to another dimension, and rocks release intuitive powers. Documentary, historiography and mythology collide and transform in a multi-format, multi-channel installation showing a virtual world of telepathic children and their attempt at reincarnation. A meditation and absurd collage of media, found footage, sci-fi cliché, and performance, Bridge Kids connects a research documentary on J.B. Rhine and the history of ESP/Parapsychology, with a science fiction drama portraying an adolescent’s technological reincarnation.

In a gallery, the viewer is confronted with a large wall drawing of a cube representing all 4 dimensional planes. Geometric sculptures and shapes fill the natural landscape in a series of skewed photographs. In a separate area, similar to a coin, 2 videos are hung on either side of a protruding wall. The first video shows a short segment loop of a fictional soap opera "The Rhine Experiments." An absurd "break up scene" drama is played out between the actor who portrays the historical character JB Rhine and the fictional character Julia Denzig. On the other side of the wall a 2 min HD Video loop of a virtual 3d rotating sculpture plays. Entitled "A Virtual Bust of Julia Denzig" represents Julia Denzig as a bust avatar, mask like and elusive. On a large wall a 16mm film transfered to HD Video is projected and loops continuously. A surreal sci-fi narrative imagines a world of only kids interpreting parapsychology, ESP, modernist symbols, and sculpture. Through their interpretations and relations a drama unfolds.

An HD Video of a 3-d Virtual Bust is rendered and superimposed over a large body of water. The virtual sculpture is a rendering of the fictional psychic character Julia Denzig - A manufactured avatar based on several of parapychologist Dr. Rhine's subjects. (16x9 ratio, 32 inch LCD monitor)