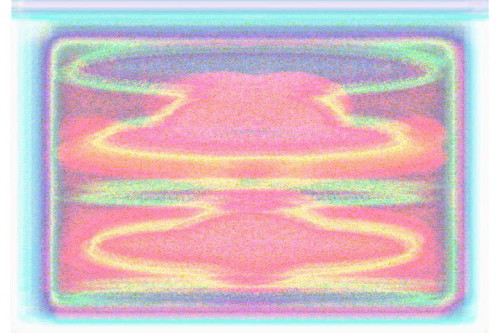 THE ENIGMA OF S.A.P. is an almost ten-minute non-camera videotape set in a visual arts milieu. S.A.P. is a mysterious new art-gallery, and two gentlemen (G & H) are checking it out. G & H, as well as their friends F & J and also a very genial maitre’d, are heard but not seen. What are seen are the “paintings” on display (my own Photoshop graphics and/or drawings). These paintings mimic various strains or strategies of abstraction - mostly but not exclusively colour-field. G & H attempt to discern how many artists are in this perplexing exhibition, and they are very curious as to who exactly comprises S.A.P. What does this acronym actually stand for? As G & H appraise the art, attempt to purchase drinks, and exchange banter with their friends F & J, the maitre’d offers the two gentlemen some tasty but indeterminate hors d’oeuvres. As the hors d’oeuvres begin to take effect, the paintings become more and more distorted.

The main body of this videotape is edited so that the paintings/images change not only in relation to which character is speaking but also to the phrasing within their sentences and paragraphs. However, after three rounds of hors d’oeuvres, G & H stop talking and electronic music usurps their conversation. Now THE ENIGMA OF S.A.P. shifts to a single-frame flicker-editing mode, as both the characters and the paintings become positively delirious. Alas, paradise cannot sustain forever.

Green and Blue's typical morning consists of two parallel split-frame image streams which are interrupted by bits of dialogue - perhaps the ghost of a screen or stage play. The image screens consist respectively of green and blue based images, although there is some processing which alters and skews dominant colours. Verbal language never co-exists with the image streams or montages, although there are traces of verbal language in the images, some of which contain rectangular letters of the alphabet. Rather, these visuals are accompanied by single musical tones - think of refrigerators with pitch. The dialogue between Green and Blue (appropriate coloured text on appropriately coloured slugs) suggests either long-term lovers or perhaps over-familiar housemates. Green and Blue wander in and out of their everyday concerns - tea, the weather, viruses, and memorials.

Trophy Life references silent screen performing comedians and action/ performance art. Originally shot in black and white as a commission for Toronto’s annual 8 Festival in 2009, the edited film has since been transferred to Mini-DV video format and then subjected to strategic image processing. The person or performer advances toward a statue resting in a downtown park. Trophy Life literalizes both ambition and orgasm the trophy which the performer breathlessly covets and embraces is certainly phallic but it also has wings. So…what could this possibly connote? Trophy Life plays the physicality of performance against an editor’s attraction to abstraction.