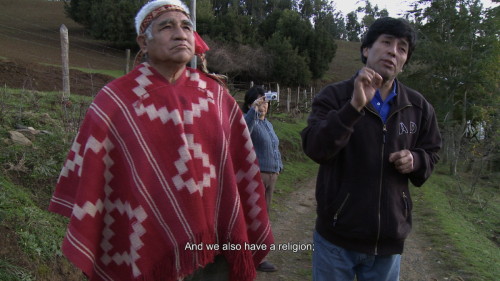 Will the indigenous peoples, whose cultures tend to privilege the relation with nature, obtain any benefit from the rising interest in the protection of nature, that seems to be developing worldwide?

Or should they rather distrust an idea of nature preservation that barely ever takes into account their territorial claims, and even tends to have a destructive counterpart?

Bearing such questions in mind, Boisseau and Westermeyer travelled to the south of Chile, a region still steeped nowadays in the German immigration that arrived there during the second half of the 19th century.

In their film Neue Brüder (New Brothers) they confront the current territorial situation with the influential figure of one of the precursors of that immigration: the romantic German painter Carl Alexander Simon (1805-1852). During the German revolutionary period, around 1848, Simon published a utopian text of his own entitled The Emigration of Democrats and Proletarians, and the National German Colonization of the Free South American State of Chile. For Simon, the south of Chile was the most adequate region for a German immigration. That “land of the potato”, was the place where “the German plant could flourish”.There, he said, the indigenous Mapuche people were looking forward to welcoming the new German brothers…

Once in Chile, Simon would be the first artist to produce landscape painting of the southern regions. The film questions these representations of the landscape and leads us to perceive the ideology they convey. Further on, Boisseau and Westermeyer try to debunk the reasons for which, in most of these paintings, Simon's signature was erased and replaced by that of Vicente Perez Rosales, a leading Chilean statesman in charge, at the time, of the colonization program in the south of Chile. They also wonder why has that wrong authorship persisted. May power relations express themselves through the representation of landscape?
The film does not have any voice over, instead, it emblematizes landscape itself as the protagonist of some minutely chosen single shots. Through the weaving of interviews conducted with a variety of denizens of those regions – which convey a plurality of visions and a polyphony of discourses –, we are eventually brought to perceive a critical deconstruction of the landscape. Freed from any naturalism, landscape becomes a medium.

The contemporary and documentary perspective Neue Brüder casts over the Chilean landscape, is the starting point for an artistic research project. Which contributes – through different discourses coming from diverse disciplines such as anthropology, ethno-history, history of art and artistic practice – to the emergence of a postcolonial concept of landscape. This research project is developed at Geneva University of Art and Design – HEAD – and funded by the HES-SO.