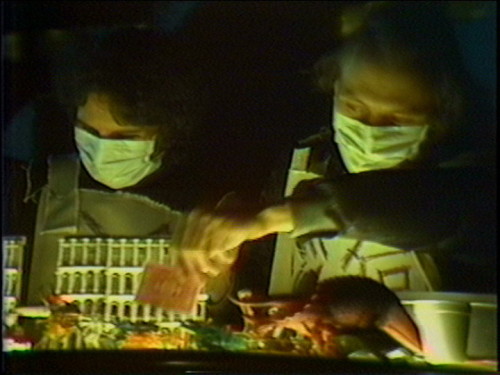 People are gathered in a warehouse for the opening of a large show of contemporary art installations. A series of recorded announcements inform them of a performance beginning shortly in the loading dock area. The audience is crowded into two tight spaces, one on either side of a ramp running down the centre of the loading dock. Heavy garage doors close behind them, sealing off the space. The lights go out.

Catastrophe Theory takes place at night in a public square with the sweeping modernistic vista of Toronto City Hall as backdrop. Perched atop a revolving ruin, Randy & Berenicci sit absorbed in a mysterious game of chance painstakingly reconstructing a ruined miniature world by throws of dice, deals of cards and chance moves upon an unseen game board.

The predominant features of this performance are two giant wooden structures each 14 feet high and 10 feet wide, each housing 13 video decks and 13 video monitors each of which play individually choreographed images throughout. The performers play in front of and around these structures, background and foreground continually shifting between the taped image and live action.

In the culmination of the piece, body parts appear on monitors at random and flash off to appear somewhere else until finally coalescing into human form. Like electronic marionettes, the giants reach out to each other and dance a romantic tango, their various body parts articulated on separate screens.