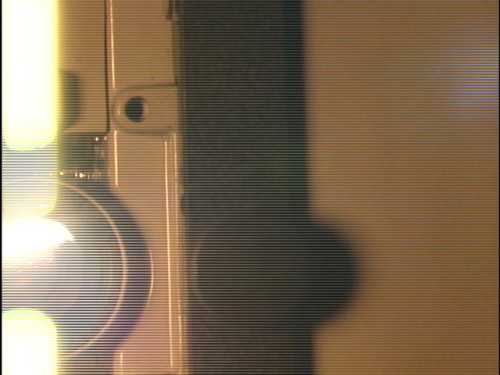 Screen Scene is a video that focuses on the surface that images are viewed on. The space where perception occurs exchanges place with observation, motioning back and forth. The piece is so concerned with its relationship to the viewer, both physically and metaphysically. In thinking about this, definitions may emerge and sight might be extended.

A film projector shoots its beam directly into the camera. In a cinematic environment, the process is mirrored by the presenting projector. So, eventually the light falls onto an audience. In recreating the recorded event, viewers are subjected to new sights, extending the trail of observation. As such, perception is explored both within and without the video.

The optical effects that are seen in Screen Scene, are only possible when recorded light is transposed to a two dimensional field. As the visual variations build, it becomes apparent the screen is the site of the occurrence. This aspect of the piece examines how we see, as well as emphasizing awareness of the medium. There were no special or generated effects in the main sequence of the piece.

Screen Scene follows the projector events with a closing coda. Here, the two dimensionality of video is seen in different ways, the physicality of the screen is framed by signal interferences and the planar surface as a place for text to exist.* These are superimposed, causing a false depth that is impossible when two planes coalesce. Two small excerpts of from Plato’s corpus verbalize the direction of thought in Screen Scene. Linking ancient observations with contemporary experience reminds us not to forget what can already be known.

*When text on a page is perceived, the words don’t exist in the ink and on the paper, but the plane serves as a vessel into our minds.