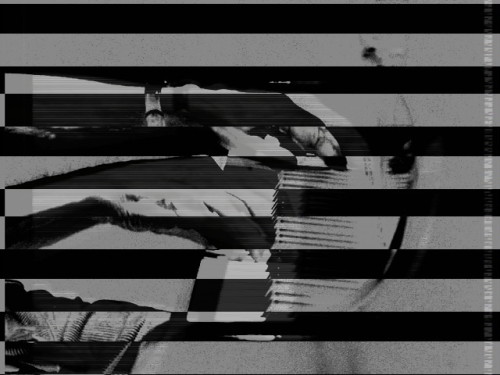 In some other words, Oracle is a combination of thoughts, primarily the musical thought of Udo Kasemets and the videoic thought of Mani Mazinani, but also of others.

In some more other words, Oracle is built from the deconstruction of parts, revealing elements, and through this activity approaching the stillness of a whole. The collection of electron pulse lines continuously change according to a binary polarity structures.

Oracle is a collaborative project that was born when Udo Kasemets introduced the I Ching and demonstrated the Yarrow Stalk oracle to Mani Mazinani some years ago. It combines the musical thought of Udo Kasemets and the videoic thought of Mani Mazinani, which exist together but function independently, like a binary pair.

The composition, for solo piano, has received its structure from the inner-connections of the I Ching. The conception and execution of the piece, including its performance, are consequents of the logic, relationships and ideas that underlie the I Ching. The unified body of sounds that occupy the resulting time-space is a solid block of thought.

Oracle is composed following the dual elemental logic of the I Ching. Human interaction with physical nature occurs where polarities are constructed. This is the means of our naming, speaking and thinking. The diversity is merely an expression of the degrees between duality.

Oracle is a video of different kinds of dualities coalescing into an emerging structure. The process of taking things apart to find the whole. Treating parts as wholes, divided to reveal elements, constructed to reveal a whole. Building through decay. Deconstruction into binary languages. There are no shortage of different binary pulses in Oracle. These many strings harmonize through interference, forming a body.

Viewing Oracle’s individual frames, a meagre amount of information is presented. This is a clear example of McLuhan’s cool media. The whole image only exists in the active participation of the audience.

The constituent sources for Oracle were diverse, including camera based footage, generated material and video processed and shaped by analog video synthesizers. Simple and complex digital compositing was also employed.