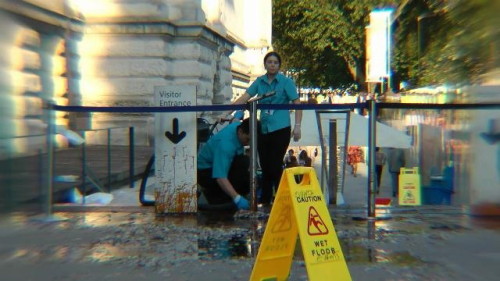 Mechanized Labour comments on the aftermath of interruptive institutional critiques, that which the London (U.K.) based art activist group Liberate Tate demonstrated on Monday June 28th, 2010 at the Tate Britain. The group poured buckets of crude oil (molasses) and feathers, in the middle of Tate Britain's summer party in protest against the gallery's sponsorship ties with British Petroleum. They called on the Tate to end its sponsorship deal with BP following the disaster in the Gulf of Mexico in April, 2010.

While I was there to film the art action, I realized that the removal of the ‘oil spill’ was more poignant. The issue that I wanted to address was the clean up process undertaken by migrant laborers, and to create a discourse about whom and what is at stake during such critiques, and ultimately who is left with the duty of cleaning up.
Split screen for single channel.