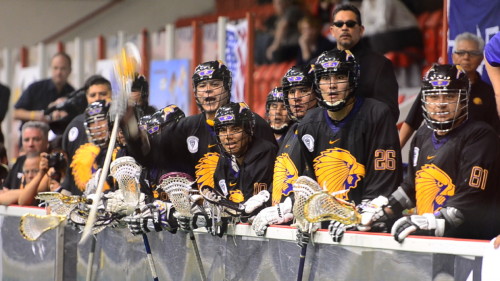 The Creator's Game: The Quest for Gold and the Fight for Nationhood

In 2010, the Iroquois Nationals lacrosse team faced two battles, the world championships on the field and the pursuit of self-determination in the world. The Iroquois are credited as the originators of the sport. Ranked fourth in the world by the Federation of International Lacrosse, the team was stranded for days in New York City while they awaited clearance from officials so they could compete in the world championships. The Haudenosaunee passports, a symbol of the nation’s sovereignty, were refused by England. Canadian and American officials offered the team expedited passports, which the team declined. They chose to forfeit the championship.

Lacrosse is known to the Haudenosaunee as the Creator’s game. The sport, like so much of Haudenosaunee tradition, is steeped in meaning. It’s also called a medicine game and is a way of thanking the earth, healing the people and entertaining Creator. The players are humbled when they play the Creator’s game and are reminded of the ancestors who played before them.

In Aboriginal communities where language and culture continue to be encroached upon, asserting ones identity is a compromise the team is willing to make. Determined to be recognized as a sovereign nation, this timely documentary follows the Iroquois Nationals on their quest for the 2011 medal in Prague, both a fight for gold and the recognition of their nationhood.

This is the story of Haudenosaunee identity, as told through the game of lacrosse, its traditional teachings, its legacy and the sovereign rights of the game’s originators.