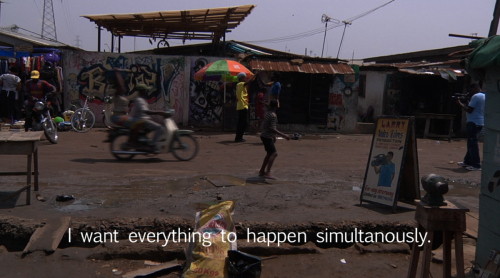 The National Theatre of Nigeria in Lagos was built for the second World Black and African Festival of Arts and Culture (FESTAC) in 1976. It is the only state-subsidized theatre in Nigeria. While its smaller halls are occasionally used for theatre performances, banquets and weddings, the 5000-seat main hall has been deserted since the early 1990s. A reopening was scheduled for 2010 but postponed indefinitely after a series of changes in direction.

Counter shot: The Bariga Arts Center was founded in 2009 in a Lagosian slum by choreographer and Nollywood actor Segun Adefila, after the rent free agreement between his company Crown Troupe of Africe and the National Theatre of Nigeria had been revoked.