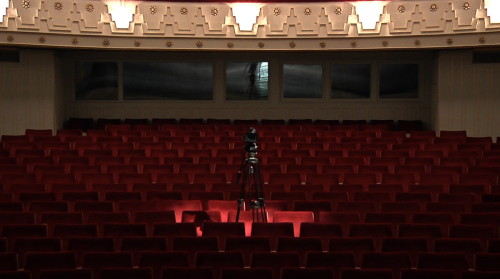 A DVD compilation of the first 3 in the 6 part series state-theatre, for educational use.

state-theatre is a series of six experimental documentaries that explore urban conditions for performance based on six case studies in Lagos, Tehran, Berlin, Detroit, Beirut and Mönchengladbach.

The National Theatre of Nigeria in Lagos was built for the second World Black and African Festival of Arts and Culture (FESTAC) in 1976. It is the only state-subsidized theatre in Nigeria. While its smaller halls are occasionally used for theatre performances, banquets and weddings, the 5000-seat main hall has been deserted since the early 1990s. A reopening was scheduled for 2010 but postponed indefinitely after a series of changes in direction.

Counter shot: The Bariga Arts Center was founded in 2009 in a Lagosian slum by choreographer and Nollywood actor Segun Adefila, after the rent free agreement between his company Crown Troupe of Africe and the National Theatre of Nigeria had been revoked.

The Tehran Vahdat Hall was Iran's first and only classical opera and ballet house. Commissioned in 1966 by the Shah's regime, the main hall resembles Vienna State Opera. Its ornaments reiterate the forms of Persepolis, the central representative architecture of the ancient persian Empire. For 13 years the hall hosted the classical ballet and opera repertoire though the official archive of Vahdat Hall does not keep any records of that period.

Zoom Out: Since the Islamic Revolution in 1979 no opera and ballet performances have taken place in Vahdat Hall. Zoom Out: Sara Reyhani, trained as a dancer, was featured as a soloist in the first performance of so called 'rhythmic movement' on the stage of Vahdat Hall in 1999. Zoom Out: In 2004, due to a private initiative, the former workshops of Vahdat Hall were turned into a puppet theatre: Ferdosi Hall is the only stage for opera production in Iran nowadays. There are currently no plans to return Vahdat Hall to its originally intended use as a ballet and opera house.

The Staatsoper Unter den Linden, built in 1741, is the oldest theatre building in Berlin. In the course of its history it represented the most opposing political systems, from the Kaiser Reich to National Socialism and the Socialism of the GDR period. Its architectural layout was changed and reconstructed several times.

From September 2010 the Opera House has again become a construction site for four years. After year-long controversial debates the state representatives assigned the architects to preserve the building's neo-rococo layout. The workers have left the factory and enter the stage. It could be that the work on the film is not yet completed at the end of the opera.