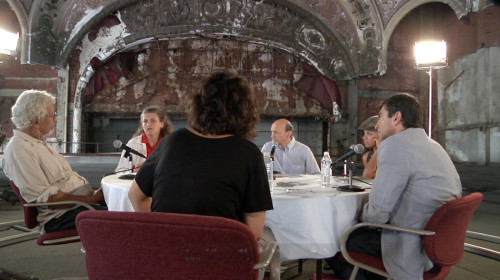 Detroit, once America’s center for auto-industry and theater, was shrinking to a third of its population. What used to be the space for theatrical presentation, nowadays presents the urban crisis. What once was private space became public open space for societal negotiation. The city became a theater itself.

In front of the backdrop of former Michigan theater, today a parking garage for the adjacent office building, the film stages the performative discourse of six locations, six neighborhoods, and six Detroiters: „...we’re sort of talking about Detroit in a way that it itself is a theater, that it itself is the object to behold."

state-theatre is a series of six experimental documentaries that explore urban conditions for performance based on six case studies in Lagos, Tehran, Berlin, Detroit, Beirut and Mönchengladbach.