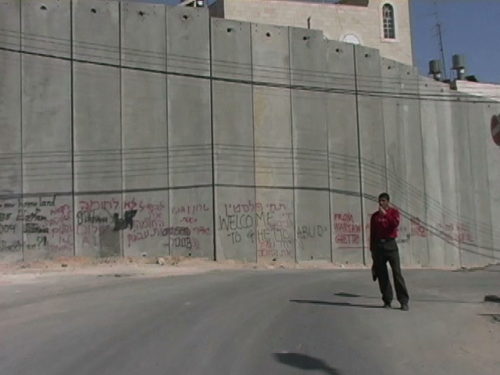 DiaDocuMEntary: a piece in my puzzle

The DiaDocuMEntary videos hover between diary and documentary, but are rarely autobiographical. Rather, they are reflections on political reality from my own subjective and embodied perspective. These videos try to chip away at common nationalist lingo, unpack it very briefly, and offer complexities where news media often fail. The videos also engage in a debate about the ethical responsibility of documentaries, and try to carve a place for enunciating the presence of the filmmaker, while still speaking on a subject beyond the personal.

This video tells the story of two Palestinian homes whose owners fled during the 1948 war and the houses now serve a museum and a daycare centre. The video tackles the question of the right of return of Palestinian refugees, the workings of public and private memory and erasure, and the unearthing of these two houses’ story by the Israeli videomaker. Recipient of the Ir-Amim ”A Moment in Jerusalem” production grant, and group screening at the Jerusalem Film Festival, July 2008. Jerusalem/Canada, 2008. 10 min.

A slow and circular camera pan movement takes the viewer from Yemin Moshe, the first neighborhood outside the old city, to the walls built by Suleiman the Great, to the new cement wall Israel has erected in Abu Dis as part of it’s separation barrier. Set like a tourist guided tour, the video asks questions about Israel’s journey outside and inside various walls. Jerusalem, 2006. 4min.

A meditation on martyrdom in both Palestinian and Israeli culture. An afternoon at an Israeli checkpoint in the West Bank is the backdrop for a letter from the filmmaker to a few children and soldiers she met at the checkpoint. Palestine/Canada, 3:30 min.

A visit to the Jerusalem farmer’s market is at once a song of praise for beloved homeland food, and a questioning of nostalgic lamentation as a result of political immigration. Israel/Canada: 4.30 min.

A video project on the idea of home for a Palestinian, Salim Shawamareh, whose house has been demolished four times by the Israeli authorities, and for the filmmaker, until recently an oblivious bystander to politics in Jerusalem, and now an immigrant to North-America. In this documentary/political diary Salim's story illustrates not only the Palestinian tragedy, but also the estrangement of the Israeli filmmaker from her country and past indoctrination by the Zionist state. Building and destroying homes is not just a physical matter, but a psychological, ideological, and emotional issue, as the video demonstrates through a fluid movement between Canda, Palestine, and Israel. 16min. Sponsored in part by Trinity Square Video.

Road #1 in Jerusalem is an invisible border separating the Palestinian and Israeli Jerusalems. This short video travels on road #1 and deals with liminality, belonging, and national narratives. Jerusalem, 8:30 min.