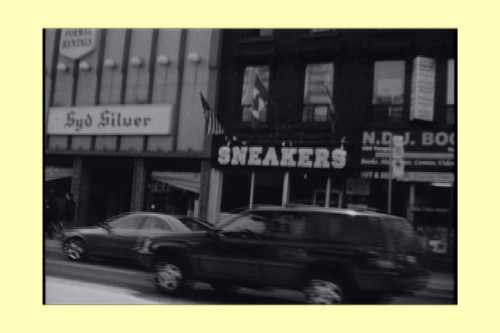 Seven Segments is an almost half-hour film/video hybrid work adapted from a series of per formative monologues previously titled Mono Logical. Each of the first six segments is characterized by an original self-recited monologue, to which individual black and white Super-8 films (digitized and transferred to Mini-DV) have been edited. The framing of the films varies within each monologue and the sixth segment of Seven Segments features altering tableaux of three different source films.

The seventh segment, which takes up over half of this new work, involves text which might be read as either condemning or forgiving. These text dissertations are linked by images recognizable from the earlier film segments. There are fifteen of these dissertations, and then these texts become subjected to effects patches and transformed into text images.

Seven Segments oscillates from being composed of black and white digitalized Super 8 film to including sections of video composed of elements found within Final Cut Pro editing systems - gels, slugs, and text. Colour is occasionally seen in sprinkles throughout this film/video. In addition to the films originally made for the Mono Logical presentations, there are excerpts from other previous works which were originally shot on Super 8 and then transferred to video. There is also a snippet of Mono Logical performance at the tail end of the fifth segment.

This film/video hybrid simultaneously refers to an essay film tradition and to performance involving language. In many ways, this new work is photographically-oriented, as filmed sequences are reframed within a larger frame and often still images are deployed. Also, an original music composition plays at broken intervals throughout Seven Segments.

Seven Segments quotes from earlier works of mine, running the gamut from 1999 to 2007. Works cited include: The Walking Philosopher (1999/2001), Damn That Eternal Basement (2004), D.O.A. Remake/Remodel (2005), and Damned and Forgiven (2007). The ambiguous dissertations of Segment Seven were previously heard and seen in Damned and Forgiven, which used performance documentation from a presentation of Mono Logical as a temporal basis. The first, second, fourth, and fifth monologues are close to their Mono Logical originals; while the third and sixth are newly written in 2012. The Mono Logical films were shot in 2003, with the exception of the Rosedale footage which dates from 2000.

Subject terrain for the monologues includes observations about teaching and educational exchanges, relationships between individuals and crowds, to parallels as well as differences between analogue and digital recording materials. Subject terrain for the seventh segment includes art pundits and academics, bad drivers, perceptions of mental illness, and much more.