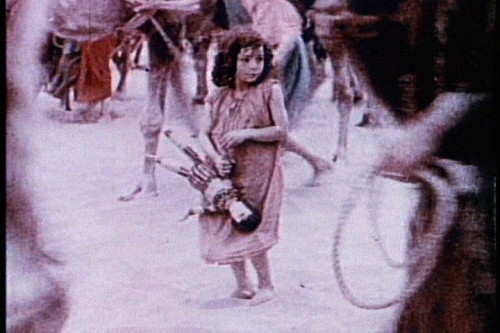 Put all the images in language in a place of safety and make use of them, for they are in the desert, and it’s in the desert we must go and look for them. Jean Genet

Palestine is like the cinema: it’s searching for independence. Jean-Luc Godard

“A mind boggling achievement by Canadian artist Mike Hoolboom, who has been called ‘the greatest found-footage master of the era.’ Skilfully assembled from existing film material, Hoolboom conjures visual allegories and cut-up counter-narratives around a notion of Palestine as “a land that is not a land.” Mining a wealth of material from TV news, documentary, fiction, and fantasy film, Lacan Palestine is a visual roller-coaster, with Hoolboom using cinema to suggest Palestine as a place of recurring psychological-colonial-projection – a space whose conquest is here spectacularly relived in celluloid waves of armed crusaders, legionnaires, Mongol horsemen, biplanes and machine guns. But as the title suggests, this is more than a mere collage. Layered, often deeply personal, and frequently challenging, the film intersperses its newsreels, desert fantasias, and historic encounters with psychoanalytic ruminations on subjects from patricide to John Coltrane, and from the elusive nature of joy to what Hoolboom calls the “loveless love story” staring Moses, Abraham and Jacques Lacan. Dizzying in its technical and conceptual density, Lacan Palestine is truly incomparable cinema.” Nick Denes, London Palestine Film Festival

“The grand prize goes to Lacan Palestine for its immersion in a complex subject that arrives via a montage that is subtle, sensitive and strong. Its great visual richness emerges from impressive iconographic research. In spite of its diversity of images, this fluid work carries an insistent theme of personal history that makes us identify with a fate or destiny, creating a persistent, high wire hum.” Festival International Signes de Nuit grand prize jury statement

“Fantastical images and semantic collages reveal film as a vital medium of memory. Biblical texts and the metaphor of symbols, Hollywood narratives and literal imagination, a wall of segregation. Like cinematic images emerging from the desert of the consciousness to stimulate our imagination, so too is Palestine searching for its borders and its autonomy. Hoolboom shows Palestine as the setting of a love story without love – with Moses, Abraham, and Jacques Lacan in the main roles.” Jihlava International Documentary Festival

“Palestine. The Palestinian territories. The State of Palestine. Simply naming this territory is an intensely complex matter. But beyond the horrific newspaper headlines, extremely tense relations with neighbouring Israel and our commonly held views, what exactly do we know about this land that is fighting for statehood and about the daily life of its inhabitants? How do we imagine and, more importantly, understand its history, present and future? Weaving together found footage from Palestine and elsewhere, Canadian filmmaker, writer, novelist and experimental jack of all trades Mike Hoolboom tries to piece together the puzzle by creating a collage that is as unsettling as it is fascinating. Adopting the demanding film essay format, this film reinvents the art of editing, using it as a tool to better grasp the various facets of an elusive reality. Lacan Palestine is a dizzying, symbolic, lively and meaningful blend of history, culture, sociology, geography and art (featuring excerpts of video art by Velcrow Ripper, Elle Flanders, Tamira Sawatzky and Dani Leventhal), structured around the psychoanalytical and autobiographical musings of filmmaker Mike Cartmell. All the elements are drawn together in a sensitive, allegorical vision of what freedom could look like.” Helen Faradji, Festival du Nouveau Cinema

“The term essay film is sometimes used a bit too easily, but this really is one. Skillfully cut and pasted from existing film material, the film provides a complex picture of Palestine. The land that is not a land, but does have inhabitants. An improbable place for love. The foundation of Palestine has a long and difficult history, characterized by a continuing battle for the right to exist. In this cinematographic essay, entirely composed of found-footage material, the history of a land without land is sketched, with its painful relationship with its neighbour Israel. Epic scenes from features, iconic news footage of historic moments, the ever-changing map of Israel, video art by Velcrow Ripper, Elle Flanders and Dani Leventhal, but also very personal recordings of everyday survival, are linked together by the psychoanalytic reflections of filmmaker Mike Cartmell, based on his own painful personal history. From his background as an adopted child, he wonders when you become someone, and how society can emerge from individuals; he compares the functioning of a complex society with that of John Coltrane’s jazz combo, in which even five super-egos managed to achieve harmony. In Mike Hoolboom’s view of Palestine, love and violence exist side-by-side, as a matter of course.” Gertjan Zuilhof, International Film Festival Rotterdam

“Lacan Palestine is a film that examines both our notions of Palestine and of ourselves. It is made up entirely of archival footage – news reports from the West Bank interrupted by amateur footage and video art, chunks of text mixed with film clips of Moses in the desert, hordes of Mongols, and blood-thirsty crusaders – a representation of Palestine’s shifting state of being and history. Another main thread is the reflections of Canadian director Mike Cartmell. Based on his own youth as an adopted child, he contemplates on how an individual is formed and whether a society made up of individuals is able to function. The title of the film recalls philosopher and psychoanalyst Jacques Lacan, and the film emphasizes the psychological dimension of the Israel/Palestine conflict, through our myths, dreams, and notions. A demanding, inspiring and touching film that is guaranteed to affect those who allow themselves to be drawn in by it.” Tromso International Festival

“Palestine is often described as a place that defies description, and for all the endless footage, a place that cannot be seen. Palestine lies between the imaginary and the real hence ‘imaging Palestine’ becomes perhaps one of the greatest cinematic and political challenges. Who better to take up this challenge than Toronto’s master experimental filmmaker Mike Hoolboom? The fragments that comprise Lacan Palestine are both the public and private languages that interpolate the symbolic sphere that constitute the history of Palestine and therefore the history of Israel as it comes into being. As both a good analyst and a good filmmaker would know, originary myths uncover what lies at the heart of an ongoing conflict. And so Hoolboom takes us through these myths, dreams and canonical cinematic placeholders, presenting us Palestine in fragments—perhaps the only way to tell the story of what may be Palestine. Hoolboom takes the name the father as a starting point, wherein the subject (here Palestine) comes into being through the law (Israel) and rifles through the deep psychoanalytic rift whose symptom is contemporary Palestine.” Elle Flanders