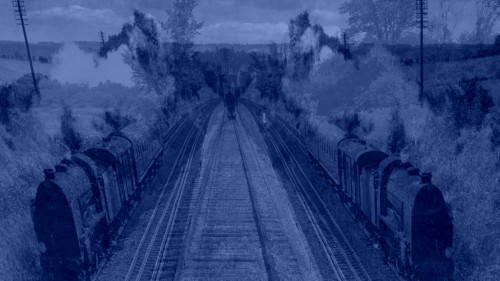 The Blue Train, a multi-channel photo-text-video installation by Vera Frenkel, commissioned for Archival Dialogues, the inaugural exhibition at the new Ryerson Image Centre in Toronto, is now available for wider viewing as a combination of interrelated videos, or, where circumstances permit, as elements of an installation.

Prompted by an exploration of Ryerson’s Black Star Collection of documentary photographs and a remembered bed-time story that these invoked, The Blue Train recreates first-hand experiences that took place as peace gave way to war in 1939 and emerged again from war’s debris in 1945.

The work consists of two key videos, viewed as a diptych, accompanied in the initial gallery version, by thirty-two short passenger narratives played randomly on ten portable tablets interspersed with stills from the same videos.

These thirty-two passengers are among those who might have been on a 1939 train en route to Paris carrying the artist’s mother, her infant daughter and an unexpected contingent of German troops. In the RIC installation, two large monitors presented the artist’s account of the pre-war journey in counterpoint with the post-war experience of Black Star photographer Werner Wolff, excerpted from a letter describing what he found on his return to Germany in 1945, and the photographs he took en route. The two journeys, serve as parentheses to World War II, allowing the viewer to sense what lay between.

*Note:
Options related to duration:
Now That I'm Back (the Black Star photo-journalist’s companion piece to the narrative video), conceived as a visual descant to The Blue Train, is roughly twice its length and predominantly silent. While in the installation version both videos are looped to ensure randomness, in a two channel screening context Now That I'm Back need not be shown in its entirety but simply screened to match the duration of The Blue Train. Alternatively, a dual screening works really well with The Blue Train shown twice in succession, and Now That I’m Back viewed in its entirety.