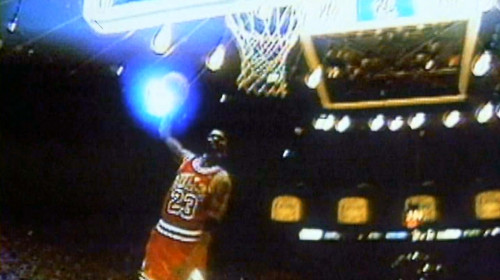 Part video essay, part audiovisual mixtape, From Deep "looks at basketball and its profound role in American life – as an everyday street game played by millions around the country; a force in fashion, music, and mass media; and a platform for broader issues of race and class. Drawing his imagery from neighborhood pick-up games, contemporary films, music videos, and spectacular sports footage, Kashmere charts a history of the game over the last century, including its rapid cultural rise in the 1980s, with the global branding of Michael Jordan; basketball's growing connection with hip hop culture; and its multiplying fan base, which laid the groundwork for the sport's significance today." (Amy Beste, Conversations at the Edge)

"Painstakingly researched and chock full of archival footage from the game's century-long history, From Deep is Brett Kashmere's sophisticated essay on the cultural history of basketball. He skillfully balances a poetic consideration of the game with a semiotic inquiry into the symbols created as the game develops from a rec center pastime into a multi-million dollar industry. Kashmere doesn't shy away from complicated analysis surrounding class, race, and capital. Rather he creates slick and compelling collages from the archives, letting his clearly passionate and personal intellectual curiosity lead. From Deep is like sitting next to your smartest friend during the game, the wonk with all the relevant stats and obscure facts, broadening the game into an exploration of wider cultural symbols and one's own involvement with them." (Christy LeMaster, CINE-FILE)