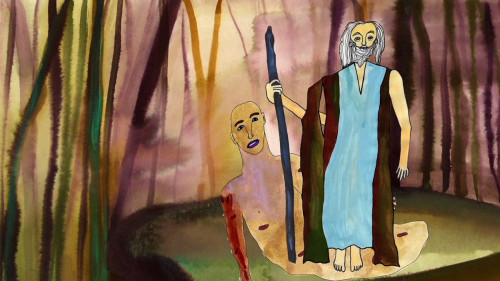 Rib Gets In the Way (Final Thoughts, Series Three)

"Steve Reinke has long been lauded for his irreverent, philosophical, and often acerbic works, which typically adopt the form of personal essays to wryly bend and reread wide-ranging topics from pop culture to sex to theories of visual perception and beyond. Reinke’s video included in the 2014 Biennial, Rib Gets in the Way, is narrated in the first person by Reinke, and addresses mortality, the body, the archive, and the embodiment of a life’s work.

"The final and longest section of the video presents an animated children’s adaptation of Friedrich Nietzsche’s philosophical novel Thus Spoke Zarathustra (1883–85). Explaining the motivation behind this long-planned project, Reinke notes, “Nietzsche is the only fun, reasonable way out of any moral or political quagmire.” The hand-drawn animations in this and earlier sections of the video are by Jessie Mott, a visual artist and writer whose work consistently engages a menagerie of human, animal, and celestial forms and with whom Reinke has collaborated on several previous videos." - text from 2014 Whitney Biennial