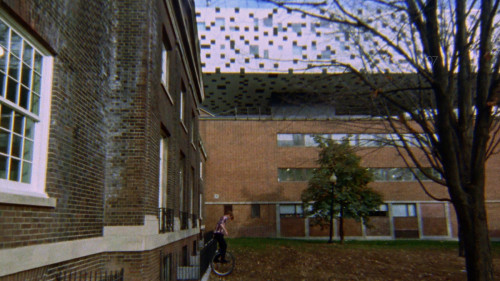 Cycle is a film installation which uses the site and architecture of OCAD as well as the of graduating dates from the Alumni Guide as a framework to explore narrative structure.

The piece is divided into four equal segments, each two minutes forty-nine seconds and four frames long (the amount of usable footage of on each of the three 100 foot rolls of 16mm film). Three of the segments are shots of the current OCAD site, the first showing the subject (artist Liam Wylie) in front of the original OCA building (now the George A. Reid wing) with a head- on close up. The second segment shows the subject from a diagonal angle with a medium shot in front of the Reid wing and the 1957 addition, from further away. The third shows a wide shot in front of the Reid wing, the 1957 addition, and the Sharp Centre, with the camera perpendicular to the subject.The three shots complete a beginning-middle-end narrative arc in a simplistic way, with the fourth black segment contains some credit information, and serves as a warm up/cool down of the arc. Each of the shots has a date counter in the top right corner, counting up from the founding of what is now OCAD University in 1876 until 2010 when the piece was made, with the hopeful anticipation of 2011 for a few frames. Starting with a black frame, for the dates when OCAD did not exist at its current main campus site, each shot introduces a new building in the year it was opened.

During all of this, the subject Liam Wylie balances on a unicycle, acting as the entertaining focal point of the piece and as a symbolically loaded figure.

Note: This piece should always be shown as a looping installation. Ideally it should be a large projection with audio, but it may also be shown on a monitor. It music always be looping, however, and so would not work as a one-time screening.