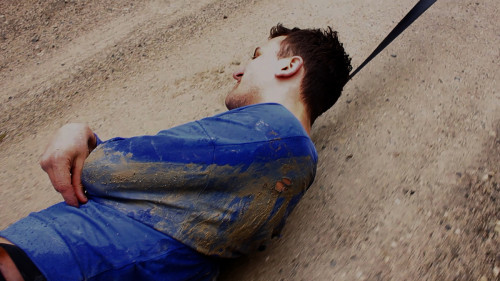 Gutterbird is a music video for the song of the same name by the Toronto band Omhouse. The video depicts a man singing to the camera while he is dragged down a rural road by a strap around his torso. The video depicts the man's genuine expression of pain and struggle, as in the actual shoot only minimal padding was used, and it was a cold and rainy spring day. The man (Omhouse singer Steven Foster) has a brief reprieve during the bridge of the song, before being pulled down the road again. At the end of the song the strap disengages and he is left shivering and torn up on a bridge.

The video was created by William Andrew Finlay Stewart and Adrienne Crossman, with Steven Foster, and shot outside Orangeville, Ontario. The song was written by Steven Foster, and performed by Omhouse. It was recorded by Noah Giffin and Nelson Thall at Henry and Nelson Thall Studios, mixed by Noah Giffin, and mastered by Milan Schramek at Lacquer Channel.

Note: This piece is a music video, and may be shown in a one-time screening context.