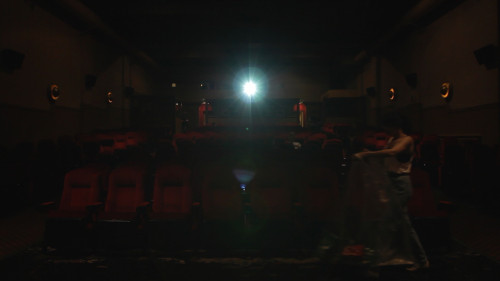 The piece Memorial is a depiction of an audience in a cinema after a film has ended, as the credits roll. In a movie theatre, the credits are a phenomenon that some choose to participate in and some choose to reject. Many find the seemingly endless scroll of names a waste of time, and an afterthought to the film itself. It is the experience of being told “These names represent people. People who have done something. Remember them”. In this way film credits, like war memorials and post-catastrophe lists of names, overwhelm, but unlike those solemn tributes they are presented in the context of entertainment. Some of the audience stay and watch, some leave. The theatre staff sweep up popcorn and collect garbage. The piece continues to watch the space until several minutes after the audience has all departed.

Memorial by William Andrew Finlay Stewart examines the phenomenon of film credits, and their connections with audiences, as well as remembrance, and loss.

Original score is by Jon Lawless of numerous bands including First Rate People and Swim Good.