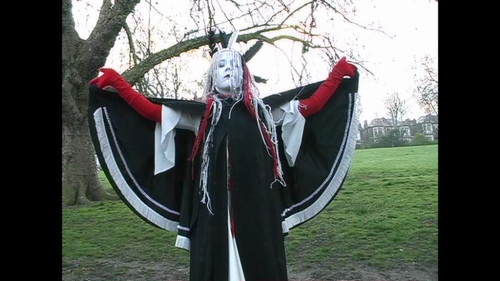 Rationale: To explore bodily perception/phenomenology through repetitive actions, gestures, and contact of the female body with eggs and soil. To use long duration, and fatigue, as a way to uncover a deeper awareness / archetypical knowledge in the body. To explore metamorphosis and transformation.

Variations: In an excerpt from the original work, the performance isolates the work with eggs only. The performer lies next to the eggs covered in white body paint, rolling them up and down her torso between her mouth and her sex. The performance happens in rhythmic cycles. The performer works with opposing directions / inversions in the body, and of the body in space.

Rationale: To celebrate the pagan holiday Imbolc (Feb 2nd) which traditionally invoked the first light of a new cycle, the initial turning of winter into spring.
Description: This work is 21-day processional performance. It investigates the interface between the sacred and the mundane. A great inspiration for this movement meditation is to encounter the general public from all walks of life, at various places throughout the city of London. Dressed in an elaborate red, white and black shamanistic garment, the performer meets the rush hour traffic invoking the mystical and poetic. She works with slow, circular gestures describing the shapes of a seed opening into flight. The rhythm of this concentrated dance deliberately juxtaposes with the straightforward focus of the nine-to-five mentality.

Duration: Various from set ritual to open duration of 2-5 hours.

Rationale: To invoke the spirit of the Raven archetype. To awaken movements towards transformation and rebirth.

Description: The performer marks a sacred space / circle. She dons a Raven headdress. As she steps into the sacred space she begins a ritual of transformation. The performer calls the spirit of the Raven into her body. She makes actions/gestures/movements to symbolically cut away the old flesh and then to ingest the old/dead body. She drums and raises the energy to alchemically transform the old into something new. The symbol of the Raven is one that stands at the threshold between death and rebirth. The final action is to wash the body with milk for purification.