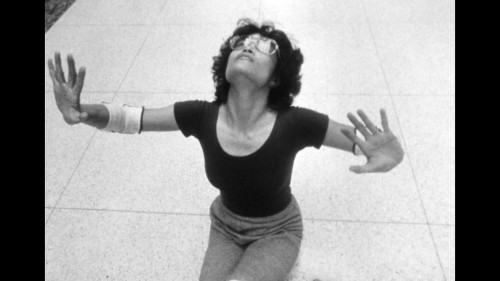 DP2 is the restored version of the film DP (displaced person), which incorporates footage from 1979 to 1982. Uniquely melding documentary and contemporary performance art, DP2 is based on the reminiscences of a displaced Ukrainian who spent most of World War 2 in Nazi Germany— miraculously surviving forced labour, concentration camp internment, and near-deportation to Siberia. Intercut with the narrative are dynamic movement sequences shot in a vast glass and marble structure, choreographed and performed by Lily Eng. On another level, the juxtaposition of live sequences with inter-titles in this film has been described as “powerfully evocative and absolutely brilliant” (American Film Festival, New York, 1983).

Eng’s action sequences expand the intellectual and emotional resonances of the narrative, and vice versa. Her unique choreography, both visceral and cerebral, and honed in art galleries worldwide, has been described as “on the cutting edge of performance art” (Esperienze a confronto, Il Diario di Napoli, Italia, 1980).

DP2 is startlingly prescient. Though a very personal narrative, DP2 deals candidly and unflinchingly with issues that are still volatile. In doing so, it places contemporary developments in Ukraine in historical perspective, explaining their inevitability, while reflecting on the nature of human displacement everywhere.