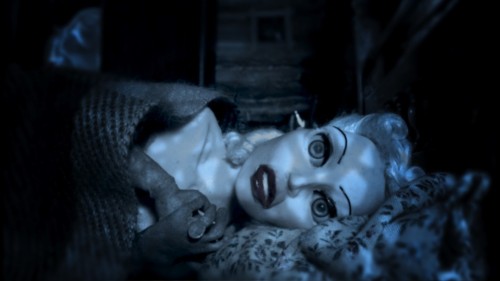 The Lodge is a Stop-Frame Animated Fairy Tale set in the Canadian wild. War Bride Pearl Simpson, born in the slums of England, yearns to rise up from the Animals that co-inhabit her new world to reign as their Queen. However the Manitous has something else in mind.

The Lodge is a hybrid Animal Mythology, Legend and Fairy tale. What purpose does it serve to dehumanize someone as an animal? In war, soldiers call their victim “targets” to strip away their humanity. Once a person or a race is dehumanized people can evoke horrific acts upon them. As witnessed in Canada’s residential school system. Aboriginal children who were taken from their families at a young age to live in a government schools were subjected to such great cruelty such as rape, drug testing, starvation, and beatings. Many of these children did not survive. They were considered savages. It is through lens of dehumanization that the “savage”was created and was seen as an animal-like people. Early colonists and missionaries sought to “save” the savages here in Canada as they were not able to understand the complexity of Indigenous ideologies and culture. The government sought to kill the Indian in the child. It would seem to be regarded as an animal in white society you will be degraded and disregarded.

However to know your animal self as an indigenous person is a powerful truth. It connects you to your spirit and helps you on your path through life. There is no shame with this acknowledgment. It is a powerful truth that not only connects us to the natural world but reinforces our connection to the spirit world.

The Lodge weaves together an English fairy tale, “The [original] Three Bears” and the Ojibway Legend of the Dandelion. The lead character, Pearl Simpson, was inspired by Canada’s “Little Emperor,” George Simpson (1787-1860) as both longed-for power and control. Unfortunately, their damaged perspective needlessly brought suffering to many Indigenous people around them. Both needed to take a deep look inside themselves to find the truth. The savage they were looking for was hidden deep within their own feral souls and this was the only wild beast they should have sought to tame.