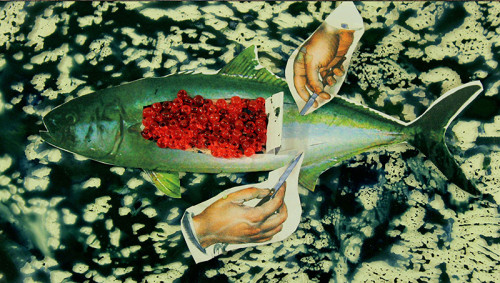 “How does trauma haunt us? How do we build fictions that tell the stories of our lived realities? And finally, how do we fantasize our way out?” -Azar Mahmoudian & Leila Pourtavaf, Curators

The title of a 7” record by riot grrrl band Heavens to Betsy, “These Monsters are Real” conjures feelings of anxiety, fear, and panic. While the reference to monsters elicits the realm of fiction and fantasy, the insistence on their realness re-centers experiences of horror and trauma, summoning images of mutated and abject beings.

Monitor 11 takes this title as its starting point and asks that we claim a space for the imaginary and the make-believe that can emerge from and entangle with the most monstrous acts, which have become a part of our everyday reality.

Monitor 11 was curated by Azar Mahmoudian & Leila Pourtavaf and first shown on April 24, 2014 at OCAD University in Toronto, Ontario.

Monitor, SAVAC’s annual experimental film and video program, showcases new and innovative work by artists from Canada and internationally. Monitor has carved out a unique place in Canada over the last decade. It has drawn participation from a growing community of international artists, curators and critics, initiating and extending dialogues around the shifting nature of South Asian politics, economies and landscape, through film and video.