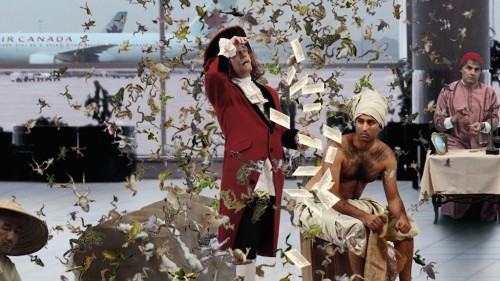 Art is political. As economic and environmental crises grip public awareness, the world is catching up to the vision and ideas of two artists who make work for social change. Portrait of Resistance: The Art & Activism of Carole Condé & Karl Beveridge - Education Video includes 1 DVD of the feature-length documentary plus three short videos: Precarious Work, Negotiating Artists’ Rights and 3 Early Works (art is political, standing up, no immediate threat) and 1 BluRay of the feature length documentary.

Precarious Work (7:50 mins)
Forging strong collaborative ties with trade union activists is key to the pioneering art- activism of Carole Condé and Karl Beveridge. Precarious Work documents their work with four part-time employees (non-unionized teachers and staff) working in Ontario colleges and universities. Their shared goal was to create a photo poster series for a union campaign to organize vulnerable public employees. The video begins with a workshop process where theatre techniques are used to help participants express their work-life stories. It then moves into the artists’ studio where these issues of precarious work are brought into focus. Condé and Beveridge close the video by reflecting on their work and how it relates to other photo documentary practices.

*In 2014 (two years after Karl spoke) these negotiations made history when Canada’s Supreme Court ruled unanimously in favour of artists’ collective rights. The CARFAC / RAAV agreement with the National Gallery was finally ratified in early 2015.

3 Early Works (7:06 mins).
This video examines three significant photo works Condé and Beveridge produced during the first decade of their collaboration. It begins with the artists speaking about their first staged photo-work ART IS POLITICAL (1975-76), followed by additional commentary about their activist practice from curator and historian, Raold Nasgaard. By the late 1970s Condé and Beveridge began using actors and sets in their documentary stories of social injustice. These innovative strategies are discussed by art historian and curator, Rosemary Donegan, who references two photo-series: STANDING UP, (1980- 81), a work about working women striking for a first contract; and NO IMMEDIATE THREAT (1985-86), a constructed photo image series about workers in the nuclear industry. Popular theatre director, Don Bouzek, worked with the artists on NO IMMEDIATE THREAT, and offers insights into that work, as well as Condé and Beveridge’s collaborative process.