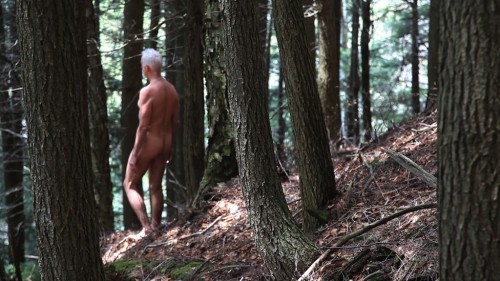 Sacred Trees is a video-based performance art piece that draws from a wide-range of responses shown towards the natural world, in particular, trees that are significant in Canada and United States. The work is originally inspired by trips to Oklahoma City to visit an Elm tree that survived the 1995 bombing and Salem, Massachusetts, where time was spent with the oldest living fruit tree brought to North America in 1638. Notable Canadian icons referenced include: the Golden spruce on Haida Gwaii, B.C.; Hollow Tree, in Vancouver and the tree that inspired the song “The Maple Leaf Forever”.

Sacred Trees considers nature as a ‘body’, vulnerable, and socially contextualized. The work calls attention to the construction and representation of the natural environment through narratives and mythologies and attempts to question how our perceptions of the natural world are shaped and negotiated. The featured trees stand as testaments to environmental concerns and political forces continually at play.

Sacred Trees consists of the following sections:
1 ) Maple Sap Performance, 15:00 minutes, a live performance in front of video projection dealing with the maple syrup harvest in Quebec.
2 ) Endicott Pear Tree, 12:13 minutes, a single channel video focusing on the history of a 400-year old tree while a man paces on the opposing side of an enclosure.
3 ) Protest Movements and Toronto Islands’ Black Willows, 15:00 minutes, a live monologue in front of video projection linking a native trees and representations of the naked body.
4 ) Harvesting, Icons and Symbols Montage, 15:12 minutes, this single channel video montages an action in an old-growth forest with shots of trees relating to consumption and of a particular importance.
5 ) The Golden Spruce performance, 17:00 minutes, this live performance in front of video projection presents the complex history of Kiidk’yass (the Golden Spruce), cut down in 1997 on Haida Gwaii, B.C.