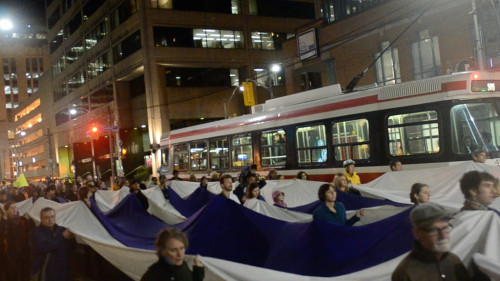 Grandfather of All Treaties

The Grandfather of All Treaties or the Two Row Wampum, is considered the most important diplomatic instrument in First Nation’s history. Wampum belts were among the first documented agreements between First Nations and European settlers. The Two Row Wampum belt consists of two rows of purple beads separated by three rows of white. The white symbolizes the river of life or the land that we all now share. The two purple rows symbolize the Haudenosaunee and the Europeans traveling side by side, never interfering with each other’s journey. Subsequent agreements were predicated upon this one. Each nation recognized the other’s sovereignty and ecological stewardship was central to that co-existence. Nearly four centuries after the Two Row Wampum agreement was made between the first Dutch settlers and the Six Nations Confederacy; Onkwehonkwe people are still trying to navigate the waters in between. First Nations have endured a history of colonization – their communities are impoverished, plagued with social and environmental issues, while Canada remains one of the wealthiest countries in the world. People, both Indigenous and their supporters are taking a stand - asserting their sovereignty and using their treaty rights to protect the land. This documentary examines the Indigenous mobilization that is happening across North America and these grassroots movements’ ability to affect real change in the world. Though the face of these issues may be the protection of Indigenous rights – it is the recognition of them that may actually determine the fate of the planet.