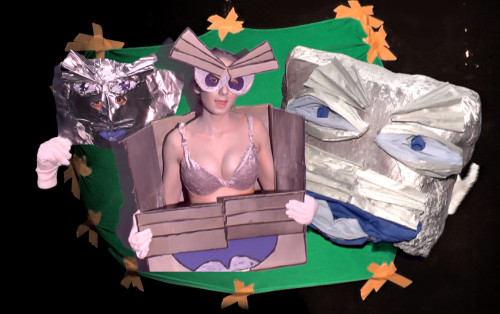 The Air Conditioner Monologues explores anthropomorphism in cartoons and animation. In this video, Ben David personifies the Air Conditioner character from Jerry Rees's The Brave Little Toaster (1987) and re-performs the Air Conditioner's final monologue before he self-destructs. The original animated scene, depicts inanimate household objects ridiculing a personified Air Conditioner for being “stuck in the wall”. The Air Conditioner then, begins his melancholic monologue while progressively overheating, both literally and metaphorically, about his state of being immobile and trapped. He gets so worked up that he accidentally self destructs and explodes.

By using her own body to re perform the Air Conditioner, Ben David is able to gender-bend this secondary character and give it a female voice and new narrative. Re gendering the air conditioner adds new signifiers and historical links to the already loaded self destructive monologue. Suddenly “I like being stuck in this stupid wall” or “I’m not an invalid” becomes gendered. Ben David's decision to costume as the air conditioner using three different personae is relevant to the performance of “Cosplay” itself. Cosplay is the practice of costuming and imitating the persona of a fictional character.

Ben David decided to explore the Air conditioner character from the perspective of a woman to draw a parallel between the representation of women and sentient machines in film and animation. Both commonly play a subservient role in a patriarchal consumerist society. Often androids are represented as female to further reinforce this parallel. The restless and insubordinate machine is a common trope in science fiction films. It can be traced back to science fiction author Isaac Asimov who coins this disposition in what he calls “The Three Laws of Robotics” in his work, "Handbook of Robotics, 56th Edition, 2058 A.D." He describes the hypothetical rules humans would place on machines should they go sentient in the future. The outcome for the machine is always perilous, the sentient machine is objectified and not respected and therefore forced to rebel. By re-performing the Air Conditioners self destructing scene, Ben David hopes to change this well established trope and make the newly imagined “female Air Conditioner” a triumphant role.