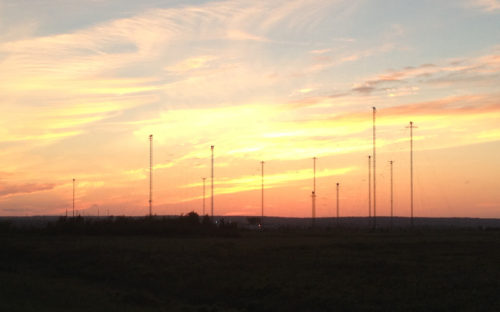 A mysterious web of international shortwave radio towers once dominated the
Tantramar marsh. Meanwhile, local residents heard radio broadcasts emanate
unexpectedly from their household appliances.
The Radio Canada International shortwave relay site was built during World War 2, to broadcast to Europe and Africa. It continued to broadcast around the world during the Cold War, not only for Canada, but also relaying transmissions for Radio Free Europe. Located in Sackville, New Brunswick, it was perfectly positioned to transmit across the Atlantic Ocean, and covered most of the globe with its transmissions.

This experimental documentary film focuses on the flat marshland landscape accompanied by stories told by local residents and the technicians who worked at the site. After beginning this project, the Canadian government announced that the Radio Canada International shortwave relay site would be shut down and dismantled. As such, a final chapter was added to the film, which documents the dismantling of this historic structure.