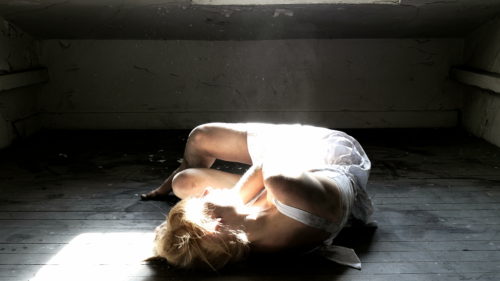 MEANTIME was shot in the empty space of the old building of the Jewish Museum of Belgium which awaits for its destruction. This building is loaded with a heavy history: first a mansion then school, it was later occupied by the Nazis during the Second World War – who used the cell where the video was shot as a prison. More recently, the museum has been the target of a terrorist attack in which four people were killed. In MEANTIME, a female body, its movements and sounds establish a dialogue with the architecture, history and the specific energy of the building. The empty cell awaits its imminent destruction; it is a building that pulses in limbo, in suspension. The video benefits from the performance of the dancer and actress Anna Tenta, and the music by Gauthier Keyaerts.