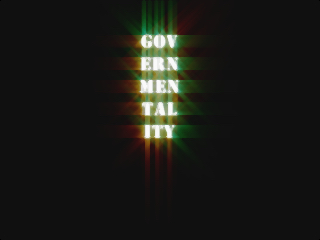 Governmentality. ... Governmentality is an expression originally formulated by the 20th-century French philosopher Michel Foucault combining the terms government and rationality. Government in this sense refers to conduct, or an activity meant to shape, guide, or affect the conduct of people. The repeated title Governmentality also refers to a band called The Government, of which I was a member between 1977 and 1983. This videotape is edited to a 21st century arrangement of a song recorded by The Government in 1979. This videotape is in series with other recent works using words as pictures in reference to language writing and colour-field painting. Unlike Narrative (2016) and 22222 (2017), Governmentality has music. This video could be appreciated by visual artists and by electronic musicians.