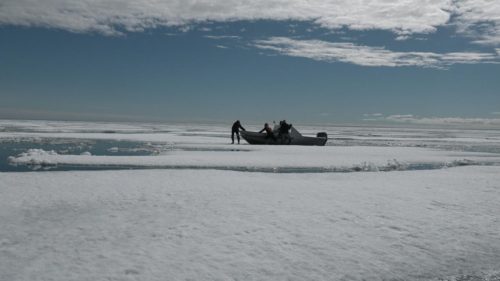 Inuit of the Igloolik region have been hunting walrus, incredibly large and sometimes dangerous animals, for thousands of years – caching and fermenting their meat for the long winter ahead. We first follow Zach on a winter hunt, as hunters venture out by snowmobile to the floe edge in search of walrus, and a more common summer hunt by boat.

Born in Kapuivik in the eastern Canadian Arctic, filmmaker, artist, and hunter Zacharias Kunuk spent his childhood summers traveling and hunting with his family and his winters going to school in Igloolik, where his family were involuntarily settled when Kunuk was nine years old. Kunuk has produced and directed many award-winning feature films such as the Journals of Knud Rasmussen (2006), Maliglutit (Searchers) (2016), and documentaries like Kiviaq Vs. Canada (2006), Exile (2008), Inuit Knowledge and Climate Change (2010), Inuit Cree Reconciliation (2013). Kunuk’s epic film Atanarjuat (The Fast Runner) won the Caméra d'Or Golden Camera at Cannes and was voted the Best Canadian Film of all times by Toronto International Film Festival survey in 2015. Kunuk is the winner of a National Arts Award, the National Aboriginal Achievement Award and was named an Officer of the Order of Canada in 2005. Walrus Hunt is part of his new 7-part documentary series Hunting With My Ancestors.