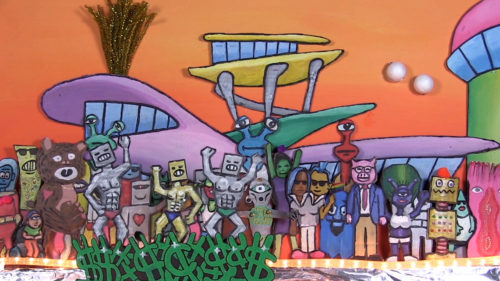 Gay Alien Shame Parade (GASP!) was created for Nuit Rose, Pride Toronto, 2017. The previous year, Black Lives Matter - Toronto intervened in the Toronto Pride parade, resulting in significant changes to Pride 2017. Among the most controversial of BLM-Toronto's demands was the removal of police floats in Pride marches and parades. The artists were disturbed by the negative response to this demand from gay cis white men that the artists encountered on social media and in person. These men had no memory, nor understanding, of the long history of police violence against the LGBT+ communities, and especially against People of Colour, a history that continues today. In solidarity with BLM-Toronto, the artists animated a satirical Shame Parade in another world, composed entirely of floats that document police violence against the LGBT+ communities in the greater Toronto area from the 1940s to the present day.