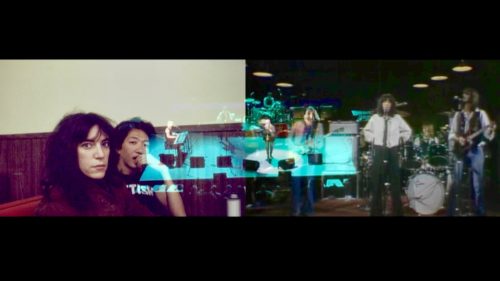 Patti & Lawrence
Video
Paul Wong 2016
Available as an installation loop 10:30 mins, colour, sound Single channel video with credits 11 mins, colour, sound
Patti & Lawrence is a mashup of seemingly disparate parts. This video work is constructed from original and found 35mm slides, original video and sourced youtube television moments and presented as split screen montages.
The sequences featuring punk singer/songwriter Patti a (150 images) were taken during 2 days in Vancouver in 1978. The 150 original slides were taken by Wong. This includes hanging out on the streets , eating, shopping and coverage of her concert. Layered on top of this is Smith’s 1976 SNL (Saturday Night Live) performing ‘GLORIA’ and moments from her 2016 concert in Seattle.
The 250 images of Lawrence Waturi Iwasaki (1933-2003) are found 35mm slides, most can be dated between 1959-1964. The snapshots of Lawrence, colleagues and friends are stylish and glamorous at home, play, travel and work as an award winning hairstylist. He was the owner of Maison Lawrence a leading hair salon in Vancouver, Canada in the 1960’s -1990’s
Lawrence was the oldest child of the Iwasaki family, his family was displaced and relocated into Japanese Internment Camps during WWII.
These photographs are juxtaposed with two versions of Leslie Gore’s feminist hit “You Don’t Own Me”. The original 1966 live television performance of the original with the 2015 version by Grace featuring G-Eazy.