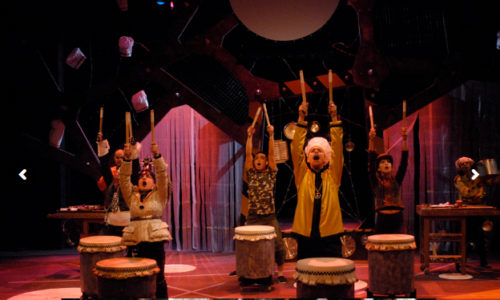 Stock Characters: The Cooking Show is an interdisciplinary Miscellaneous Productions performance project involving a diverse group of at-risk/high risk youth. Hilarious and hard-hitting, Stock Characters was a campy Iron Chef parody set in East Vancouver - but an apocalyptic East Van of the future. Using the framework of “a hardcore cooking contest at the end of the world,”

Artistic Director Elaine Carol and a cast of young people ages 15 to 26 took a raw, honest look at the challenges facing youth in the community: poverty, racism and other forms of stereotyping, gang violence, addiction, and abuse.

Performed mostly in English, the script included significant sections in Farsi, Punjabi and Spanish. It also incorporated music, dance and video. Stock Characters: The Cooking Show pushed boundaries both in its content and its aesthetics, but remained accessible: at once angry and hopeful, funny and frightening, beautiful and brutal.

The November 2007 performances of Stock Characters: The Cooking Show marked the culmination of a three-year journey that, true to MISCELLANEOUS Productions’ tradition, had been as much about community development as it had been about the creation of a work of art. Building on workshops and outreach initiatives begun in spring of 2005, a casting call in September of 2006 drew youth from Eastside high schools, community centres and workplaces.