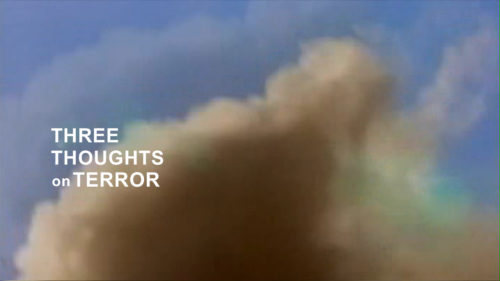 In Three Thoughts on Terror, investigative journalists Robert Fisk, Jeremy Scahill and Vijay Prashad approach the concept of terror from their respective angles. Fisk dismantles terror as a term that is rendered meaningless to alienate political movement from its origins: justice and injustice. Scahill points out that terror is a relative term, as its interpretation depends on which side of the bombing you’re on. Using the absurd example of the ‘The Hague Invasion Act’, he shows how the US sticks its thumb in the eye of international law: “Some republicans in the US Congress were discussing putting forward legislation that they referred to as “The Hague Invasion Act”, the idea that if US personnel were ever to be brought to The Hague on war crimes charges, the US could deploy military forces to The Hague to snatch those personnel and liberate them from the evil clutches of international law.” Vijay Prashad takes rather a philosophical approach, reciting Pakistani poet Faiz Ahmad Faiz: “what you see around you, leaves you with no obligation but to feel something. And if that feeling cannot be controlled, you have to do something about it. You can’t refuse this world.”