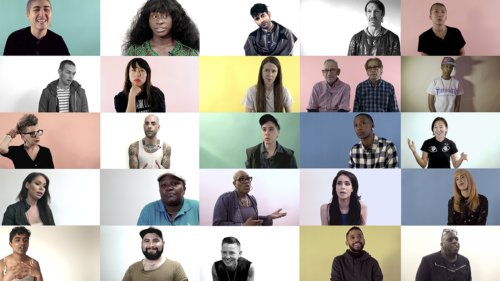 INVERSE/THE FUTURE IS OFTEN A STEP BEHIND : TEMPORARILY ON HOLD!

~ Change is the only constant in life ~

INVERSE/THE FUTURE IS OFTEN A STEP BEHIND is a multi-part experimental documentary project that weaves together the lives of a diverse group of people who celebrate difference through gender non- conformity, non-traditional relationships, radical sex practices, activism, politics, and subversive art. Challenging the mainstream assimilation of LGBTQIA+ identity, INVERSE maps a cross-generational queer community by engaging in the daily lives of its participants. Experimental in approach, the project takes form as a three-part immersive video installation that vividly combines these stories, interviews, and portraits. Made over the course of 41⁄2 years, INVERSE foregrounds fluidity and change; both of gender and our beliefs around it.

The first part, A Day in the Life, is the centerpiece of the project. This 20-minute four-channel video projection follows five people side-by-side as they perform their ordinary lives against the backdrop of New York City. Resembling a filmstrip, these parallel narratives unfold on each screen and visually play off of one another. Illustrating a sense of daily reality, the installation is infused with the sense of six degrees of separation, as the characters become interconnected through their movements. A Day in the Life features Alok Vaid-Menon, a gender non-conforming performer and writer; Raiden, a transgender man and kindergarten teacher with a wife and children; Chealsea, a transgender woman from the House of Xtravaganza; Alex, a bisexual cisgender woman and journalist married to another woman; and Shaktii, a gender-fluid teenager and activist.

The second part, Voices, is a collage of conversations with 30 people –ranging in age from 15 to 75 years old – who live their lives beyond the normative bounds of mainstream gay culture. Including the participants from A Day in the Life, each interview gives context to the larger project by spotlighting the particular issues of socioeconomic barriers, bigotry, misogyny, racism, transphobia, toxic masculinity and other forms of violence confronted on a daily basis. Voices is intended to be watched across four video monitors, each displaying 10-minute segments, or alternatively in full on a single screen. Audio comes from directional speakers so as not to interfere with sounds coming from other parts of the installation. These directional speakers will make this a truly immersive experience.

The third and final part, Faces, is a single 20-minute video piece that is the child of Jenkins’ most recent project, WALK! For 30 years Jenkins has been documenting New York’s Queer Black and Latino Ballroom scene. WALK!, is a testament to Jenkins’ passion for this singularly inclusive and diverse community. Celebrating difference over similarity, house-ballroom culture has much to teach mainstream, heteronormative society about gender, sexuality, and community. Faces, portrays the fierce joy, defiance, and pride of voguing ball attendees. Uncomplicated in their set-up: these subjects move and pose, alone and together, for the camera against a simple backdrop.

Echoing the nature of this community, the distinct parts to INVERSE form a complementary whole. Brought together, the project’s diverse elements offer a physical and symbolic reflection of the diverse community that the piece altogether portrays. Although each part stands strongly on their own and can be exhibited separately, these interweaving storylines are intended to be experienced together through an immersive video installation. Combined together they create the message Jenkins is ultimately aiming to convey.
An atmospheric soundtrack by New Yorker Tim Cramer (Maelstrom Media) and Berlin-based DJ Daniel Wang combines ambient music with sounds taken from A Day in the Life storylines, a passing subway, elevator doors closing, or footsteps. While previous projects have taken on a more straightforwardly linear documentary form, INVERSE pushes the viewer’s engagement with its dynamic subjects and questions by experimenting with multi-channel video presentation and sound installation.

Although each part stands strongly on their own and can be exhibited separately, these interweaving storylines are intended to be experienced together through an immersive video installation. Combined together they create the message Jenkins is ultimately aiming to convey.