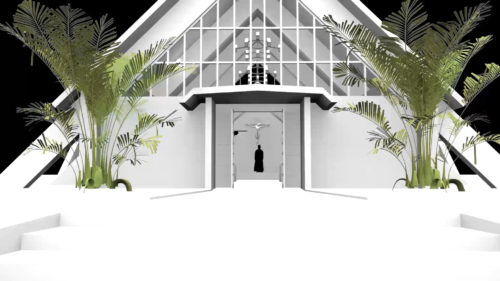 Morte Dell’Arcivescovo is an experimental recreation of the opening scene from Italian filmmaker Gillo Pontecorvo’s unmade film about the assassination of Salvadorian Archbishop Oscar Romero. The work was originally created by Public Studio for their 2015 exhibition The Accelerators. In The Accelerators, Public Studio speculated on the ways that trade, commerce, and colonialism reverberate across centuries and continents, tracing real and imaginary connections between the French Revolution, the Toronto Purchase, the French radical group Action Directe, and Pontecorvo’s film work. Following his influential film The Battle of Algiers, Pontecorvo wanted to make a project exploring the United States’ criminally unjust political interventions in Central and South America. After years of being stonewalled by producers, he said he felt ÒimpotentÓ and but for a draft of a script, the film was never realized. The film's intention was to look at the injustices committed by the USA in Latin America through the life of Archbishop Romero, an outspoken activist against US aggression assassinated at the hands of a CIA-trained Salvadorian Death Squad. The script's existence was hardly known but for a few scholars who had remarked on its presence in Pontecorvo’s archive. Public Studio managed to locate the script and following it closely, reconstructed the film’s opening sequence using appropriated footage, archival images, and CGI reconstructions to strictly replicate the script’s scenographic and musical directions.