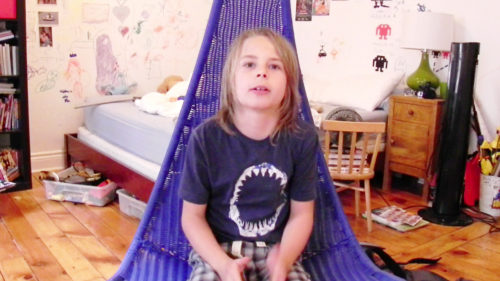 This is My Friend Ethan

I made this video in 2013 with my friend Ethan who was nine.
Here Ethan shares his memories, opinions, and experiences about le printemps eìrable (Maple Spring), a 2012 Quebec-wide student movement that took to the streets in daily marches to protest tuition increases against the Charet government. An avid photographer and videographer, Ethan was enthusiastic to participate as subject and director. He left the editing and filming of our time together to me and generously supplied me with access to his extensive video and image archive, which are used in this piece.

Ethan took part in the nightly banging of pots and pans with his friends and family for les casseroles, and he and his classmates marched around the block during class time with their teacher after making their own personal protest signs in June 2012. He attended a student march in May 2012 and several picnic protests with his mother and I. These are some of the events and actions that Ethan discusses in this project.

This video was originally made for the debut issue of Transmutations Journal, an experimental multi-media forum for a critical practice-based reflection of media and performance. This is My Friend Ethan was also part of an exhibition launching Transmutations at Skol Gallery in Montreal in 2013.