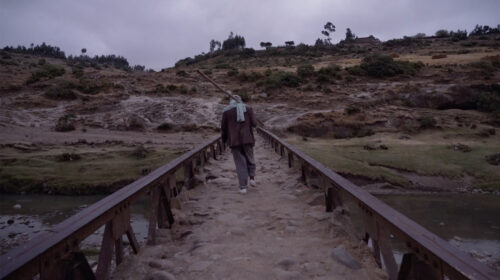 The film Rift Finfinnee takes the viewer on a journey through the periphery of Ethiopian capital Addis Ababa. In strictly composed images and a soundtrack that interweaves the original conversations in a complex way, the film takes the concrete geography, architecture and the every day life of individual agricultural and construction workers in the east of Addis Ababa (in Oromo: Finfinnee) as the starting point for an allegorical narrative about the becoming urban of African societies on the edge of civil war.

The film documents the rural-urban transformation of space and its consequences for living together using the example of four settlements in the east of the fast growing Ethiopian capital:
The village of Dingaja, the Bole Arabsa social housing estate, the Ayat Condominiums and the gated community CCD Homes. Four different backdrops for the profound social change in Ethiopia, all four within sight of each other, but separated by a deep rift, which divides city and non-city, present from projected future, Oromo from Amhara: the gorge of the Akaki River.

A single pedestrian bridge spans that "rift", part of the large African rift valley, which not only represents the geographical and administrative border between city and country, but also manifests itself in the symbolic rift between urban and rural life, which triggers bloody conflicts between the urban Amhara, the politically dominant Tigray and the Oromo farmers. If you cross the bridge to settle on the other side, you representatively make a decision for the future of an entire continent - rural or urban, digital or analog, agricultural or industrial.

With Rift Finfinnee, Daniel Kötter continues his study of urban peripheries, which he began with Hashti Tehran, which won him the special award of the German Short Film Award.