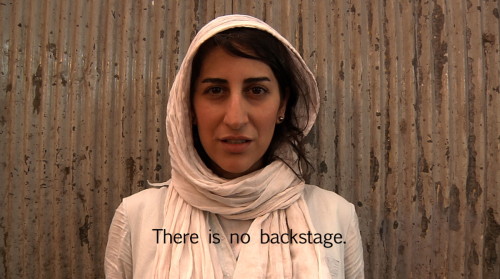 The Tehran Vahdat Hall was Iran's first and only classical opera and ballet house. Commissioned in 1966 by the Shah's regime, the main hall resembles Vienna State Opera. Its ornaments reiterate the forms of Persepolis, the central representative architecture of the ancient persian Empire. For 13 years the hall hosted the classical ballet and opera repertoire though the official archive of Vahdat Hall does not keep any records of that period.

Zoom Out: Since the Islamic Revolution in 1979 no opera and ballet performances have taken place in Vahdat Hall.

Zoom Out: Sara Reyhani, trained as a dancer, was featured as a soloist in the first performance of so called 'rhythmic movement' on the stage of Vahdat Hall in 1999.

Zoom Out: In 2004, due to a private initiative, the former workshops of Vahdat Hall were turned into a puppet theatre: Ferdosi Hall is the only stage for opera production in Iran nowadays. There are currently no plans to return Vahdat Hall to its originally intended use as a ballet and opera house.